About the brand ↓
Sort by price
Ladies
Men
Picto watches

When the Modernist Danish architect and industrial designer Arne Jacobsen designed a building, he didn't just develop the exterior, he designed everything in it – from tables and chairs to fixtures and fittings. Picto watch, which you can buy in our store in UK and Europe, is also a perfect example of his best works and vision. A number of design icons emerged from this process: the infamous 1950s Swan and Egg Chairs were originally made to furnish the SAS Royal Hotel in Copenhagen (opened in 1960). The best-selling Bankers watch, meanwhile, evolved from a clock Jacobsen designed as part of his winning entry for the National Bank of Denmark’s headquarters (completed in 1978).

When Jacobsen died in 1971, Danish homeware brand Rosendahl collaborated with the architect’s former employee Teit Weylandt to condense the design of several of Jacobsen’s wall clocks and designer watches to the size of a wristwatch. In addition to the Bankers designer watch, timepieces were also created from the designs of clocks hanging in Aarhus and Rødovre City Halls in Denmark. The sale and distribution of these have since been handed over to Copenhagen Watch Group, a company set up in 2014 with help from Rosendahl to specialize in developing Jacobsen's clocks and designer watches.

Copenhagen Watch Group has also taken over the sale and distribution of the Picto watch, designed in 1984 and still one of Denmark’s most iconic timepieces. The first wristwatch to display the time as a pictogram, the hour is indicated by a dot on a rotating dial, while minutes are signalled with a conventional hand. Now it's available in United Kingdom and Europe. The watch looks simple, but developing the mechanics proved challenging. Several brands tried and failed to make the watch reliable: "The company that first produced it had huge success with the watch but it was difficult to control the disc," said CWG CEO Peter Henriksen. "Eighty per cent of the watches were sent back and they went bankrupt."

Rosendahl bought the rights and re-engineered the design. "Many brands have since picked up on this," Henriksen said. "It's a very inspirational watch."
Close 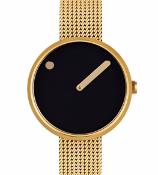